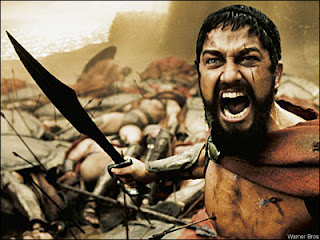 There’s a popular artist in pop music culture called Eminem. You might have heard of him (or switched the dial on your radio swiftly when he came on, depending on your tolerance for offensive language.) His lyrics often carry varying degrees of anger, discontent, and even deep-seeded pain. He wrote one song about a guy born on the wrong side of the tracks, so to speak. He’s been dealt an unfair hand and faces betrayal and animosity at every turn. And yet he comes upon a moment of opportunity in which, if he is willing to lose himself completely, he can lay hold of his dream and be set free from his prison once and for all.

The song is crude and will offend many of you but I’m going to copy it here anyways. I suggest you give it a listen as well (try playlist.com) – I find it very moving on a number of levels.

Firstly, I am inspired by the song. I am inspired by a hurting kid who rises up and says, “I’m not givin’ up that easy!” and lets out his gigantic roar. I’m inspired for myself, at the idea of losing myself – defying fear – standing up and letting go.

The other day, as I listened to the song at rather alarmingly high decibels in my car, Jesus hit me with an even more inspiring take on this. As Eminem chants, “so here I go, it’s my shot, feet fail me not, this may be the only opportunity I’ve got!” I saw HIM (Jesus), dressed in battle gear, galloping fiercely on an unbeaten trail, toward a small door – an unlikely opening – into the heart of a lost soul.

Paul Young writes in The Shack that, even though not every road leads to the Father (in fact, only one road does), He will take any road necessary to get to us. This is profoundly moving to me. We have a Father who will go to any lengths to rescue us – a savior who will charge down any path toward any chance, no matter how dismal, to get to us. He sees each one of our lives from the perspective of eternity and He knows precisely the moment that is the best moment to show us the reality of His love and the absolute lost-ness of our independence. Not everyone will accept His offer, but if there is a chance … Any chance at all … He will take it!

When you read this song – and if you risk listening to it – even though obviously not all the lyrics apply – think about Him. Think about His tenacity. Think upon the fierceness of His love. Here is Lose Yourself:

Look.. if you had.. one shot,or one opportunity
To seize everything you ever wanted.. in one moment
Would you capture it.. or just let it slip? Yo..

[Verse 1]
His palms are sweaty, knees weak, arms are heavy
There’s vomit on his sweater already, mom’s spaghetti
He’s nervous, but on the surface he looks calm and ready
to drop bombs, but he keeps on forgetting
what he wrote down, the whole crowd goes so loud
He opens his mouth but the words won’t come out
He’s chokin, how? Everybody’s jokin now
The clock’s run out, time’s up, over – BLAOW!
Snap back to reality, Oh there goes gravity
Oh there goes Rabbit, he choked
He’s so mad, but he won’t
Give up that easy no, he won’t have it
He knows, his whole back’s to these ropes
It don’t matter, he’s dope
He knows that, but he’s broke
He’s so sad that he knows
when he goes back to this mobile home, that’s when it’s
back to the lab again, yo, this whole rapshody
He better go capture this moment and hope it don’t pass him

[Verse 2]
Soul’s escaping, through this hole that is gaping
This world is mine for the taking
Make me king, as we move toward a, new world order
A normal life is boring; but superstardom’s
close to post-mortem, it only grows harder
Homie grows hotter, he blows it’s all over
These hoes is all on him, coast to coast shows
He’s known as the Globetrotter
Lonely roads, God only knows
He’s grown farther from home, he’s no father
He goes home and barely knows his own daughter
But hold your nose cause here goes the cold water
These hoes don’t want him no mo’, he’s cold product
They moved on to the next schmoe who flows
He nose-dove and sold nada, and so the soap opera
is told, it unfolds, I suppose it’s old partner
But the beat goes on da-da-dum da-dum da-dah

[Verse 3]
No more games, I’m a change what you call rage
Tear this motherf*n roof off like two dogs caged
I was playin in the beginning, the mood all changed
I’ve been chewed up and spit out and booed off stage
But I kept rhymin and stepped right in the next cypher
Best believe somebody’s payin the pied piper
All the pain inside amplified by the
fact that I can’t get by with my nine to
five and I can’t provide the right type of
life for my family, cause man, these Godd*n
food stamps don’t buy diapers, and it’s no movie
There’s no Mekhi Phifer, this is my life
And these times are so hard, and it’s gettin even harder
Tryin to feed and water my seed plus, teeter-totter
Caught up between bein a father and a primadonna
Baby momma drama screamin on her too much for me to wanna
stay in one spot, another day of monotony,
has gotten me to the point, I’m like a snail I’ve got
to formulate a plot, or end up in jail or shot
Success is my only motherf*n option, failure’s not
Mom I love you but this trailer’s got to go
I cannot grow old in Salem’s Lot
So here I go it’s my shot, feet fail me not
This may be the only opportunity that I got

Listen: http://www.playlist.com/playlist/additem/254750481
WARNING: May be offensive adds on the above linked page