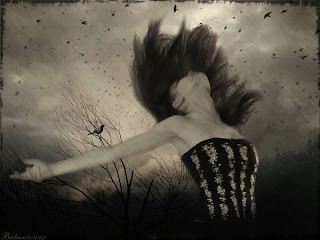 Whenever I hear a speaker broach the topic of “the woman’s role” in marriage, my chest usually involuntarily tightens up a bit. It’s nowhere close to the way it used to be, when I would actually become physically ill in a matter of seconds. Blame it on being reared in a church club that preached female subservience or just the fact that I resented being a woman for most of my adolescence and young adult life; convinced for the most part that God had given me the short end of the stick, so to speak.

Eventually, He did enough work in me that I was able to embrace my femininity but it wasn’t until He hit me with a particular revelation that I was able to sit through any kind of Ephesians 5 sermon without having a mild panic attack.

A good friend of mine thought Easter time might be a great time to post this tiny and yet profound bit of revelation. And I think she’s right. (You’re so quick, Shawna =)

It was one fateful summer day, as I wrestled with this whole concept of women being the “weaker sex” and the injustice of it all, when my Jesus offered an interesting observation to me. “Have you considered that I’m only asking you to do exactly what I have done?”

He reminded me of Paul’s letter to the Philippian church, when he says that Christ “did not consider equality with God something to be grasped.” (Chapter 2 in Philippians is, by the way, quite a wonderful section to read if you’re wrestling through any of these issues.)

You see, Jesus, our example of exactly how incredible and powerful and effective and intimate our lives could be, shows us that the way to get there from here is to let go of all our rights. Every last one. Do not grasp onto your right to anything. He, the King of all Kings, bowed down low and submitted to US. Does that make you twitch a little? Do you remember Him donning a servant’s towel and washing the dirt and dung from his disciples’ feet?

Jesus let go of everything He “deserved” to have. He leaned down low and lifted us up, pushed us forward into our destiny as children of God. This is the pure definition of “submission” ~ from a place of lowliness, to raise another above yourself; raise him or her up and establish them in all their potential and promise and destiny.

Forget about squabbling over who is weaker or who has more authority or who has more of a voice. This is all a waste of time. This high calling to which we have been called is to be like the One who was, in fact, obedient to the point of death, even the humiliating death on a cross.

Do you see? This is the upside down Kingdom of God, here on earth. In order to walk in the fullness of your authority and destiny as an anointed child of God, you must follow Christ’s example. This involves submission and humility and surrendering all of your rights to anything.

I am convinced that, the degree to which we have surrendered is the degree to which we will experience intimacy with God and authority and power from on High to accomplish His good purposes in our lives. From this place of submission, there will be no question as to the authority that operates in our lives. It will not be contrived or announced or forced on anyone! It will be obvious.

I said to a friend once, who was incensed at the idea of women in ministry, preaching to men, “I don’t know the answer to whether the Lord has called me to minister to men and women alike, or to clean toilet bowls. Of one thing I am certain, my life is submitted to Him, and whatever it is He will have me do, I will do it, because my life is not my own. I was bought with a price. By His grace, wherever He leads me I will go.”

J.
« What is the Cross Anyway?
Validation »